A nice little write up from Elliott Starr, Head of Copy at 20something about ParkVillage’s recent shoot in South Africa.

Working with our directors, Studio Birthplace, is always an adventure, but this one was really special. Having enlisted the expert strategy & creative guidance of 20something, Park Village took to the wilds of Africa to shoot across two weeks both on location and in studio, in order to realise the incredible creative vision of Studio Birthplace on this truly unique campaign. Having battled covid cancellations, tropical storms, spider bites, car accidents and being submerged in 36,000 litres of edible oil, the team emerged the other side grateful for the unwavering camaraderie and cradling some incredible footage. We can't wait to share it, Scroll through to read the full piece. 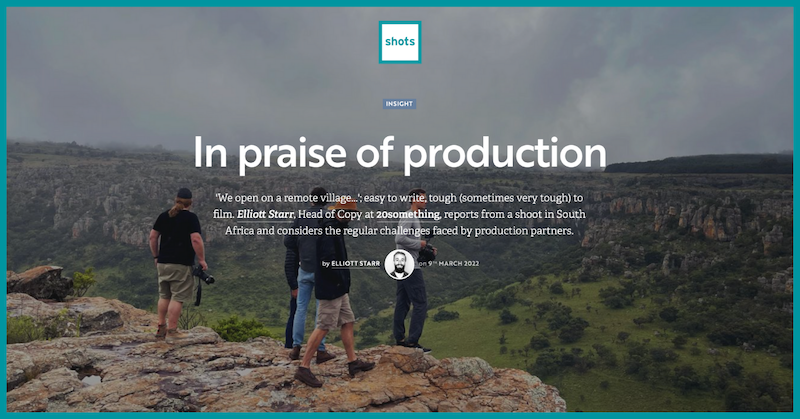 'We open on a remote village...'; easy to write, tough (sometimes very tough) to film.  Elliott Starr, Head of Copy at 20something, reports from a shoot in South Africa and considers the regular challenges faced by production partners.

I like to think I have a reasonable level of physical fitness. I’m no Chris Hemsworth, but I do my burpees. I reckon I could keep up with him on a light jog. That said, as I write this, I'm currently on a shoot for a sustainable fashion client. It’s being produced by our friends at Park Village and Studio Birthplace. We're shooting in South Africa. More specifically, in Bulembu and Kaapsehoop, then in Redwood Forest and London Valley.  I asked local production staff and they told me most of these locations have never been filmed in. One of them was used for The Gods Must Be Crazy, back in 1980 (the storyline of which, by the way, is quite apt for what we’re filming five decades later). I’m not surprised. Getting to these locations, though worth it, is bananas.

Ok, it's confession time; sorry Chris, but I am battered. Everything aches, but with good reason. I refuse to sit around, picking my belly button fluff and sipping a flat white while everyone runs around lugging heavy, awkward objects, assembling, dissembling and contributing. 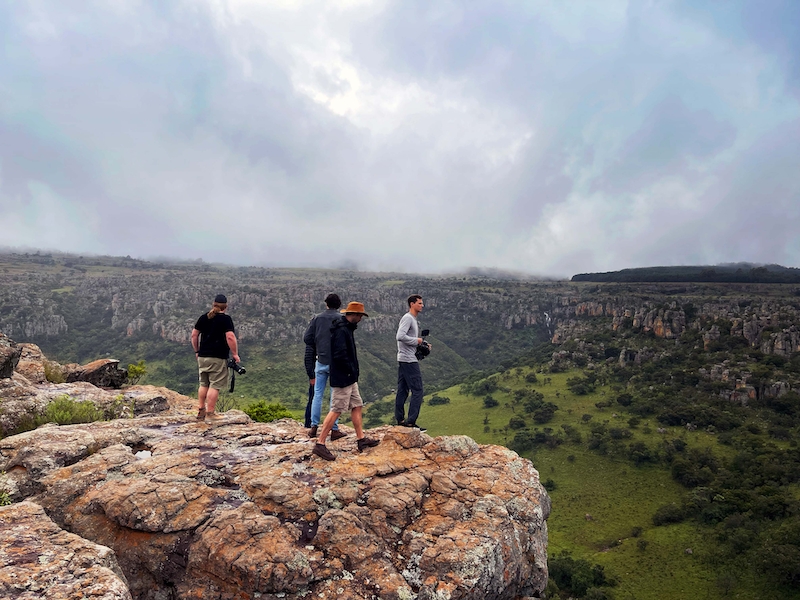 But yesterday's shoot day taught me that being helpful is hard work. There was plenty of monitor horny-hawk-eye’ing but, sandwiched around it, here’s a rough run down of the day: Walk down the hill with a heavy box. With a very heavy box. With a very heavy, very expensive box. Of course, it will also need to go back up the hill. Now, where’s that lens? Ah, it’s at the top of the hill. We need it pronto? Ok. Sprint up the hill. Jog back down. It’s basically leg day, all day… but don’t drop that lens.

My body dislikes me very much for rendering its services yesterday. But today’s another day. Another shoot day, to be precise. We’re back at it. That’s when I remember, these people do this every day. This is their career. This is their 9-5. Our DoP tells me he’s fresh off filming a documentary. It entailed a prep day and four shoot days each week. The project started in 2020 and finished in 2022. (As a side note, a few hours later, that same DoP came eye to eye with a snake. Local crew tell us Black Mambas can be up to 3m long. Effectively, they can stand up, and support up to ⅔ of their length. That’s a Dwayne ‘The Rock’ Johnson-sized snake, looking you in the eye. What’s more, they’re super-gnarly. They regularly chase wild horses.)

The above 9-5, in reality, is a 3am start, (2am start if you’re the ground unit), and a 7pm finish. It means multiple iterations of unpacking, lugging, setting up, taking down, van packing, and location moving. It means lunch is ‘whatever local catering is available’. Oh, and also, it means an infinite-time-warp predicament of trying to retain a semblance of healthy eating within its confines. No local catering? Guess it’s a banana and some sour cream and chive lentil crisps. 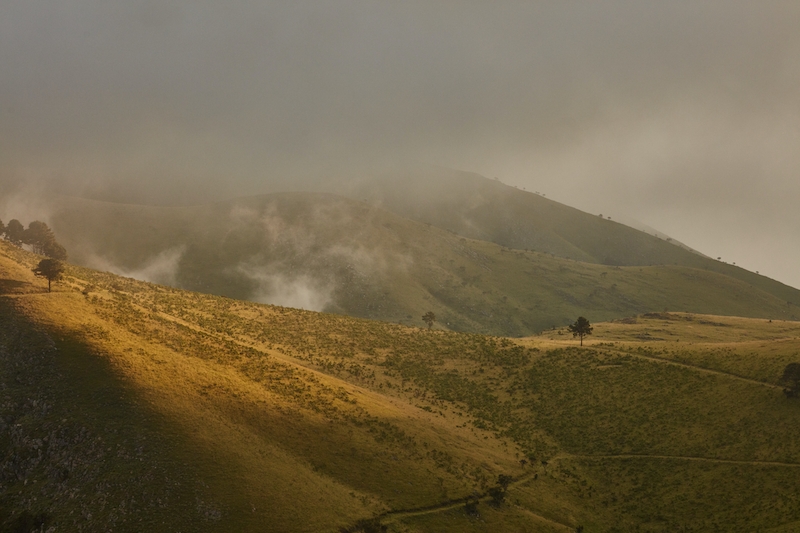 It means a driver being rushed to hospital after being bitten by a spider. It means a camera operator stacking it while crossing a Chris-Hemsworth’s-core-strength-challenging bridge over some poop-inducing rapids. This is whilst carrying a box full of lenses worth hundreds of thousands of pounds. It means a mild car crash. It means knee-high river crossings, wet feet, and socks drying on the van roofs at lunch. It means all of this, and simultaneously, not a single complaint. Nope, not a freshly-permed diva in sight.

Our DoP tells me he’s fresh off filming a documentary. It entailed a prep day and four shoot days each week. The project started in 2020 and finished in 2022. I've always tried to avoid being a diva, myself. That might be because, at 20something, we share a home with a production company. We get to witness the tiny, flaming hoops they jump through to turn a creative idea into a reality. When you see the inner workings of a production company you realise the cataclysmic domino effect a lack of respect, consideration, and appreciation from the creative agency can have for production companies. It's why we've always worked hard to embed ourselves in the production world. We like to collaborate as closely as possible with the production partners we work with. When it works, it's a beautifully symbiotic relationship, with opportunity and guidance flowing in both directions. No triple bidding. No presenting six-figure scripts while demanding they are made to work for the price of a Sainsbury's weekly shop. 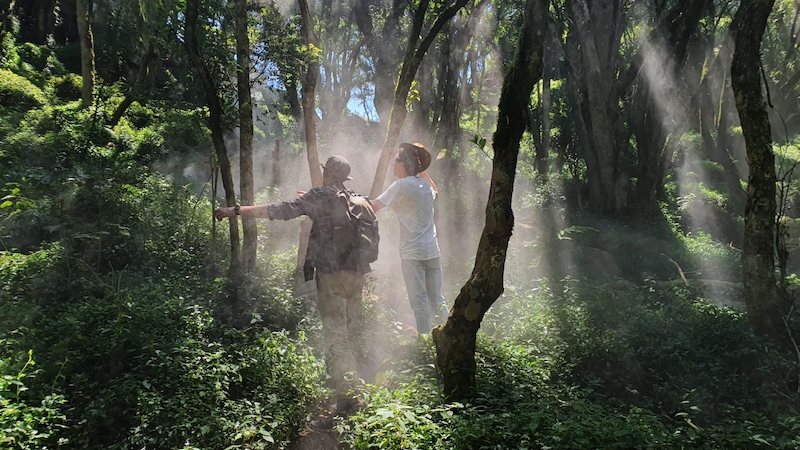 What’s my point? Well, it’s this: I really think, as an industry, we need to better appreciate what production people go through to make our ideas a reality. In layman’s terms, we should just be less of a twat on set. Ideally, throughout the entire pre-/peri-/post production process. Sure, I might be stating the obvious, but I also believe that which is obvious in thought is rarely common in practice. We get to witness the tiny, flaming hoops [a production company] jump through to turn a creative idea into a reality.

The purpose of a shoot is to turn our scribbles-come-scripts-come-decks into reality. Of course, depending on the job, you might not be making a film per se but, chances are, you're making and capturing something. That something requires cameras to roll. That requires everything set up, and every specialist able to focus on their specialism. And that requires the effort of every single person on set. This South African shoot's environment and conditions really drive that home. Park village and the local production company, Silver Lining, have assembled a crack squad here. Without said squad, this shoot would, without doubt, collapse like a flannel umbrella.

In a literal way, every single person here makes the squad. From the director(s), to the 1st AD, to the production assistants, to the people making the coffee. Each is, in their own way, a wizard walking amongst us mere muggles. So, let’s all bear that in mind next time we toss out requests like ‘can we make the ginger less ginger? I don’t want to have to fix it in post’. 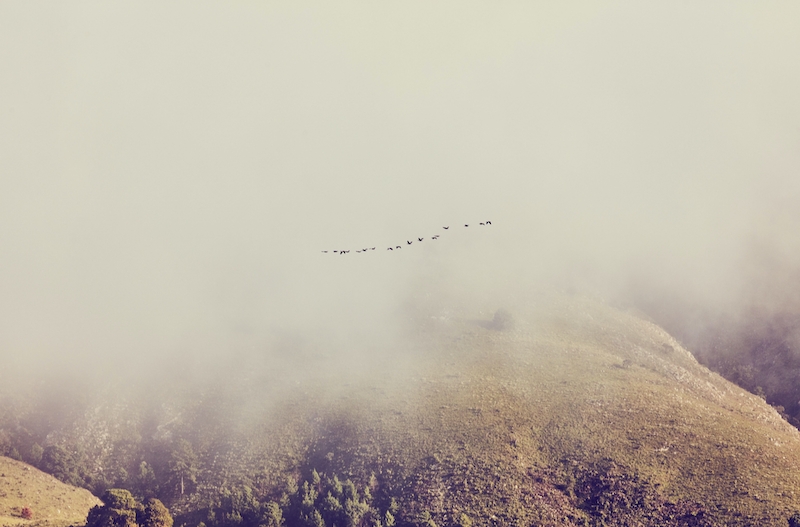