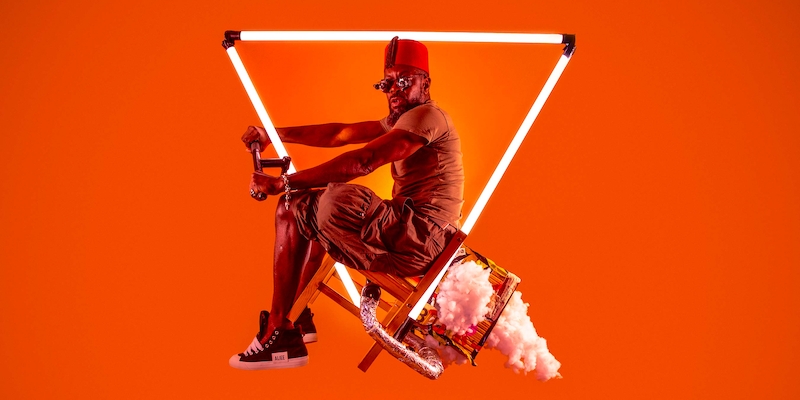 Borrowing October Gallery’s words: “Benji considers himself a Choreo-Photolist; a term he coined to encapsulate his unique practice where theatricality, choreography and photography meet in the image. His breathtaking photographs, comprised primarily of self-portraits in incredible, anti-gravitational poses with a medley of props, draws the audience into a different dimension. In the hyper-realities he presents, the subject is liberated by acts of the artist’s imagination. Whether exploring life as an outsider, issues surrounding mental health, or complexities of fatherhood, Reid makes the audience part of the discussion. Each perfectly poised portrait, set against vivid backdrops and adorned with fantastical objects, addresses the world we live in. Everyday objects like a paddle, a sparkler, or a stool transform and transport the subject into an alternative reality which offers protection and liberation. The photographer Robert Golden describes in detail how Reid ‘’turns the trashcan into a rocket, he will use motors contrived to fly higher and faster than the crowd. His anti-gravitational mysteries, which fail to reflect the ‘real’ world as it seems to be, does what fine art can do in troubled times. He makes us smile – a victory in itself, but more, he provides a greater reality, one worthy of his talent.’’